Iowa State University has a long history of generating electricity, dating to some of the first electric lights that came from Thomas Edison, the inventor of the light bulb himself. In 1880, J.K. Macomber, a physics professor at Iowa State Agricultural College, received electric lamps from Thomas Edison to use for demonstrations in the Physics Lab.

By 1890, all major buildings on the west side of campus had electric lights. Electrical loads had grown to the point that a new power station was needed. The Iowa General Assembly provided $5,000 for a new power plant. The new power plant was designed by Professor George Bissell and built in 1891, directly north of Engineering Hall (today's Lab of Mechanics Building).

The power plant housed a Corliss steam engine that used steam from coal-fired boilers to generate electricity. The exhaust steam from the engine was used to heat the nearby Engineering Hall. This was a very efficient process called cogeneration. (Cogeneration plants can exceed 75% efficiency compared to 33% efficiency of conventional power plants and use a single fuel to simultaneously produce thermal energy and electricity.)

The new power plant was also used to power the mechanical department’s machinery and serve as an experimental laboratory.

Men in the photograph are believed to be chief engineer W. H. Trip and fireman John Johnson.

In 1897, the university installed a new campus water system, designed by Professor Anson Marston. The water system included a new deep well drilled at the west end of the College Power Station, a 162,000 gallon steel water tower and a system of underground water mains to connect the college buildings to the new well and water tower.

Marston water tower can be seen in the background behind the water works building.

By the turn of the century, campus energy needs exceeded the capacity of the original power plant. There was also a desire to remove boilers from individual buildings and move towards a campus-wide heating system.

The university constructed the campus district heating system in phases between 1907 and 1914. The plant was built to provide heating, steam, and electricity for the entire campus. Since 1906, the Power Plant the university’s increasing demand for energy has required many expansions to the original plant. The plant has also been upgraded many times to comply with changing environmental regulations.

142 foot long by 42 foot wide building with arched windows and a gable roof. A relic wall from the original building remains between the Heating Pant boiler and chiller rooms.

With the post-war enrollment increasing dramatically, the power plant could not handle the demand. From 1948 through 1952, the university expanded the power plant by installing two new 3,000-kilowatt turbine generators, two new coal fired stoker boilers, and new mechanical systems to handle coal and ash.

In the 1960’s few campus buildings had air conditioning, those that were had their own chillers. The university was planning to build the Iowa State Center and Maple-Willow-Larch dormitory complexes and desired to included air conditioning these new facilities. After considering various options, the university decided to install a district cooling system for the entire campus.

Environmental regulations did not exist through most of the 20th century. The utility staff operated the Power Plant in a manner to maximize efficiency, but no efforts to reduce emissions were required.

In 1970, Congress passed the Clean Air Act. These new regulations resulted in needed improvements at the Power Plant. The university responded to these new regulations by installing pollution control equipment on the existing boilers in 1972. In 1973 and again in 1975, the university replaced two older coal boilers with new larger coal boilers equipped with new and better pollution control equipment.

In 1978, the university again expanded plant capacity by adding a 13,280-kilowatt generator and a second chiller to serve increasing cooling demands.

In 1986, the university formed the Utility Enterprise, which then began to charge the campus for its energy usage. The enterprise then was able to finance future expansions an also accurately determine energy costs for the campus buildings.

The university continued to expand the power plant in the 1980s. In 1984, the university installed a third chiller to serve increasing cooling loads.

The Utility Enterprise completed another major expansion in the late 1980s. A new water plant and maintenance facility was built in 1987, replacing the original water plant designed by Anson Marston. In 1988, the Utility Enterprise replaced aging coal boilers with new boilers to increase capacity and improve environmental performance. The two new boilers were circulating fluidized bed boilers, a state-of-the-art design that maximized efficiency and exceeded environmental requirements. These boilers were selected because environmental performance was inherent in the design of the boilers.

In the early years, Iowa State was a stand-alone campus and not connected to the electrical grid. Eventually limited connections were made, but generally Iowa State continued to be self-sufficient. Electricity usage continued to increase and reliability became more and more critical to campus operations.

By the mid-1980s, the university realized a need for a more reliable electrical connection. In 1993, the university constructed the Haber Road Substation which became Iowa State's first reliable connection to the electrical grid. The Haber Road Substation project was the result of a partnership with the City of Ames and included a new joint electrical agreement between the two parties. Iowa State could now decide whether to make its own electricity or buy it from the City of Ames or other suppliers.

Cooling loads for campus continued to increase requiring more chilled water capacity. There was no room for additional capacity at the Power Plant, so the Utility Enterprise built the North Chilled Water Plant in 2003 and installed a new steam-driven chiller. The North Chilled Water Plant was designed with space to install additional capacity in the future.

In 2009, the Utility Enterprise added renewable energy to its energy portfolio. Iowa State University partnered with the City of Ames to purchase renewable wind energy from a wind farm operated by NextEra Energy Resources. The wind farm is located in northeast Story County and provides approximately 10% of the university’s electricity.

In late 2010, the three Regents institutions initiated and Environmental Strategies Study to consider alternatives to meet the requirements of the anticipated new EPA environmental regulations for industrial boilers. Up to this point, the university has relied on coal as its energy source since the original Edison plant was built in the 1880s. Coal was used because of its availability and low cost. However, emissions from coal are higher than emissions from other fuel sources such as natural gas. With the completion of the study in July of 2011, Iowa State selected two alternatives to study further. Ultimately the university decided to replace the older stoker coal boilers with new natural gas boilers and to continue to burn coal on the fluidized bed boilers, but modify these boilers to meet the new regulations. In 2012, the Board of Regents approved a major project to replace 3 of the power plant's 5 coal boilers with new natural gas boilers. This project was needed to comply with new environmental regulations and to replace boilers that were nearing the end of their service life. The power plant can now burn coal and/or natural gas and uses the combination of fuels to minimize energy costs for the campus. In 2013, new environmental regulations were finalized (Boiler MACT) and boilers 3 and 4 were converted to natural gas and boiler 5 was retired. A portion of stoker coal, ash and pollution control equipment was also demolished.

Campus electrical demand continue to increase, especially on the west side of campus. In 2016, the Utility Enterprise constructed a new Northwest Campus Substation to support the increase in demand and to prepare for future demands. At the same time, the Utility Enterprise installed a second transformer in the Haber Road substation, doubling its capacity.

Several completed developments on the west side of campus increased the demand for chilled water service. The Utility Enterprise responded by adding two electric chillers at the north chiller plant, increasing campus cooling capacity by 30%. New chilled water piping was installed from the North Chilled Water Plant to Pammel Drive, west of Molecular Biology and down Bissell Road to support cooling demands on the west side of campus. As part of the project, a new high capacity electrical feeder was installed from Haber Road Substation to the North Chilled Water Plant to support the new chillers. 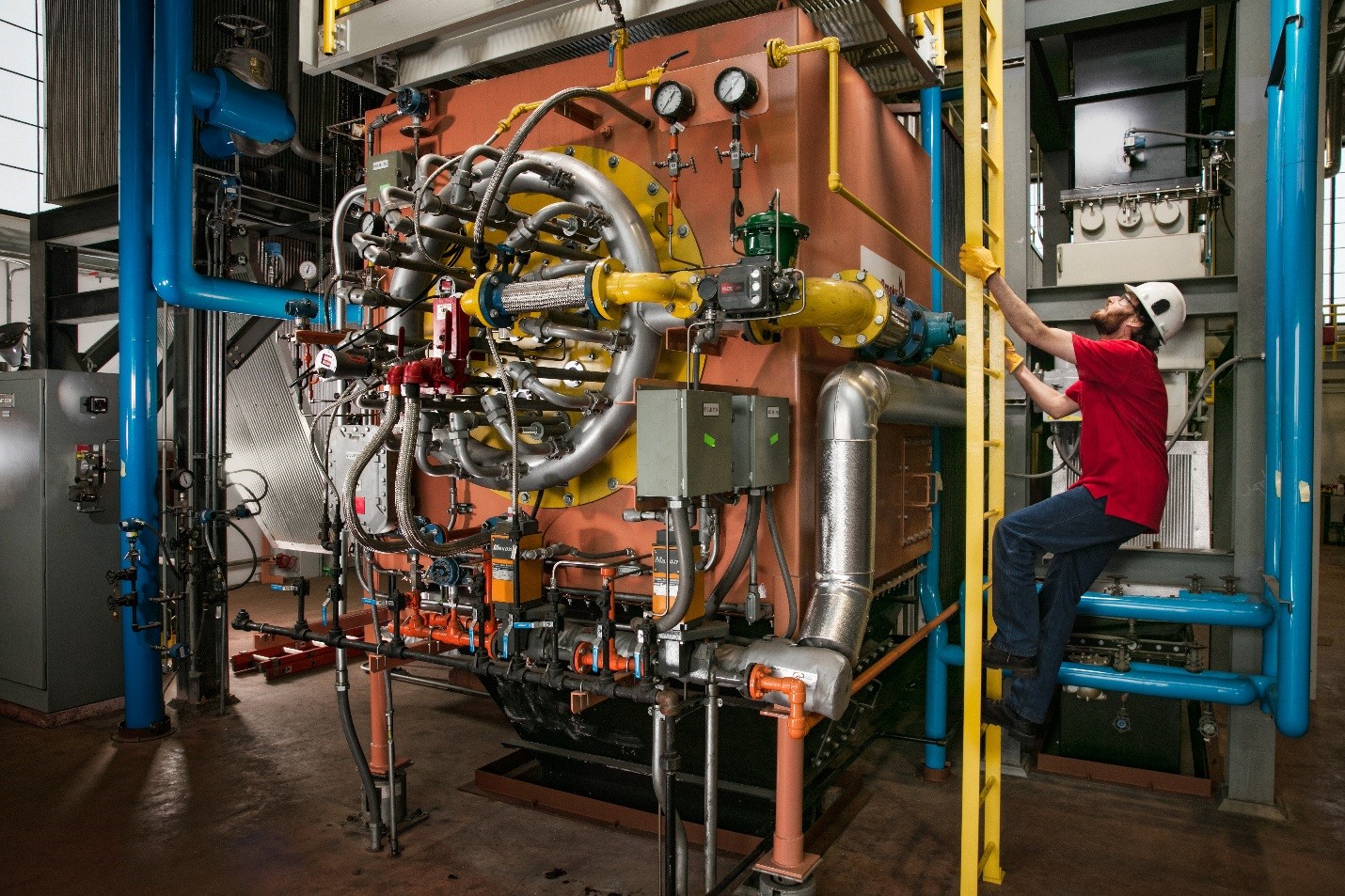 Natural Gas Boiler – one of three installed in 2016 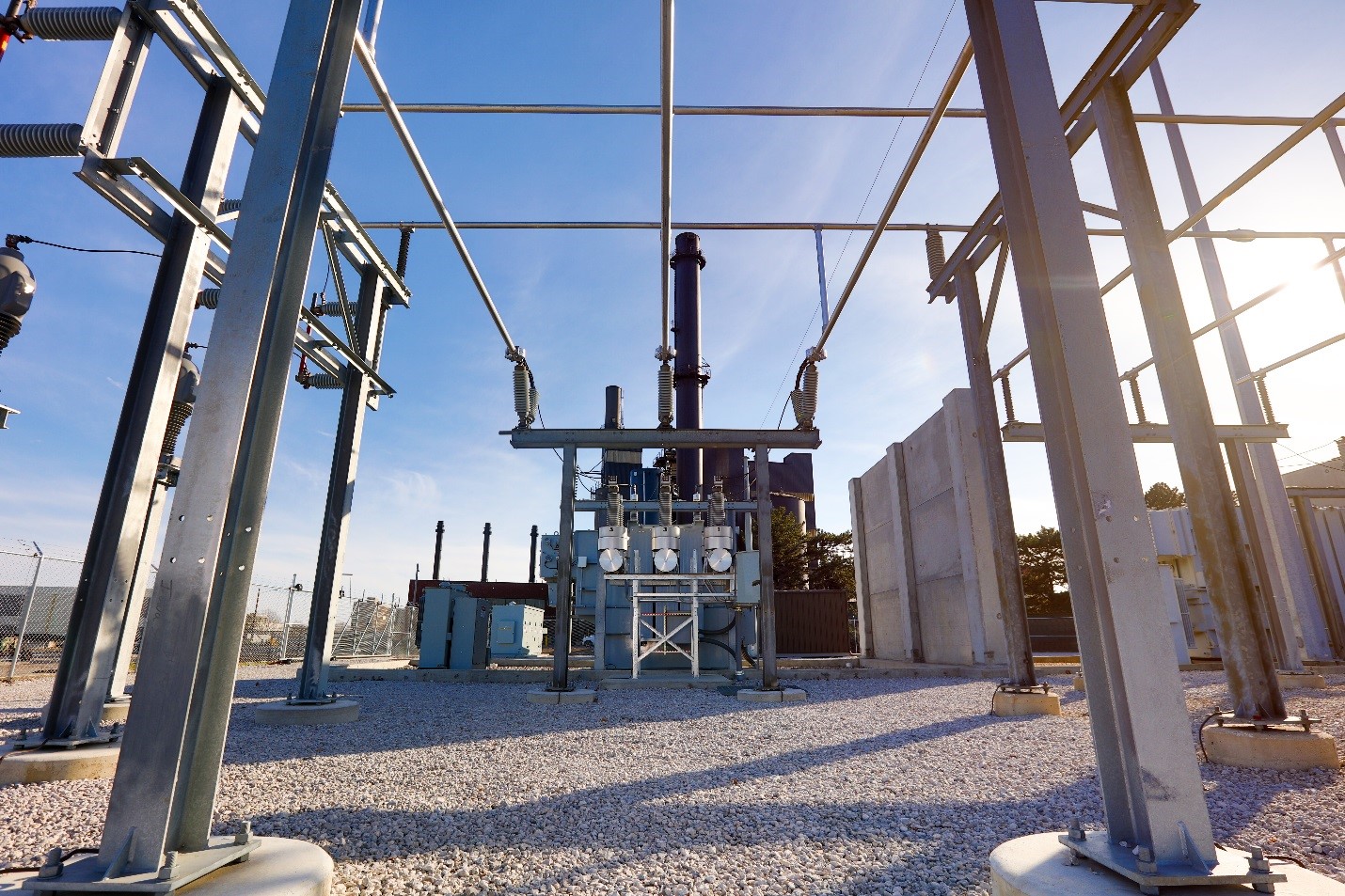 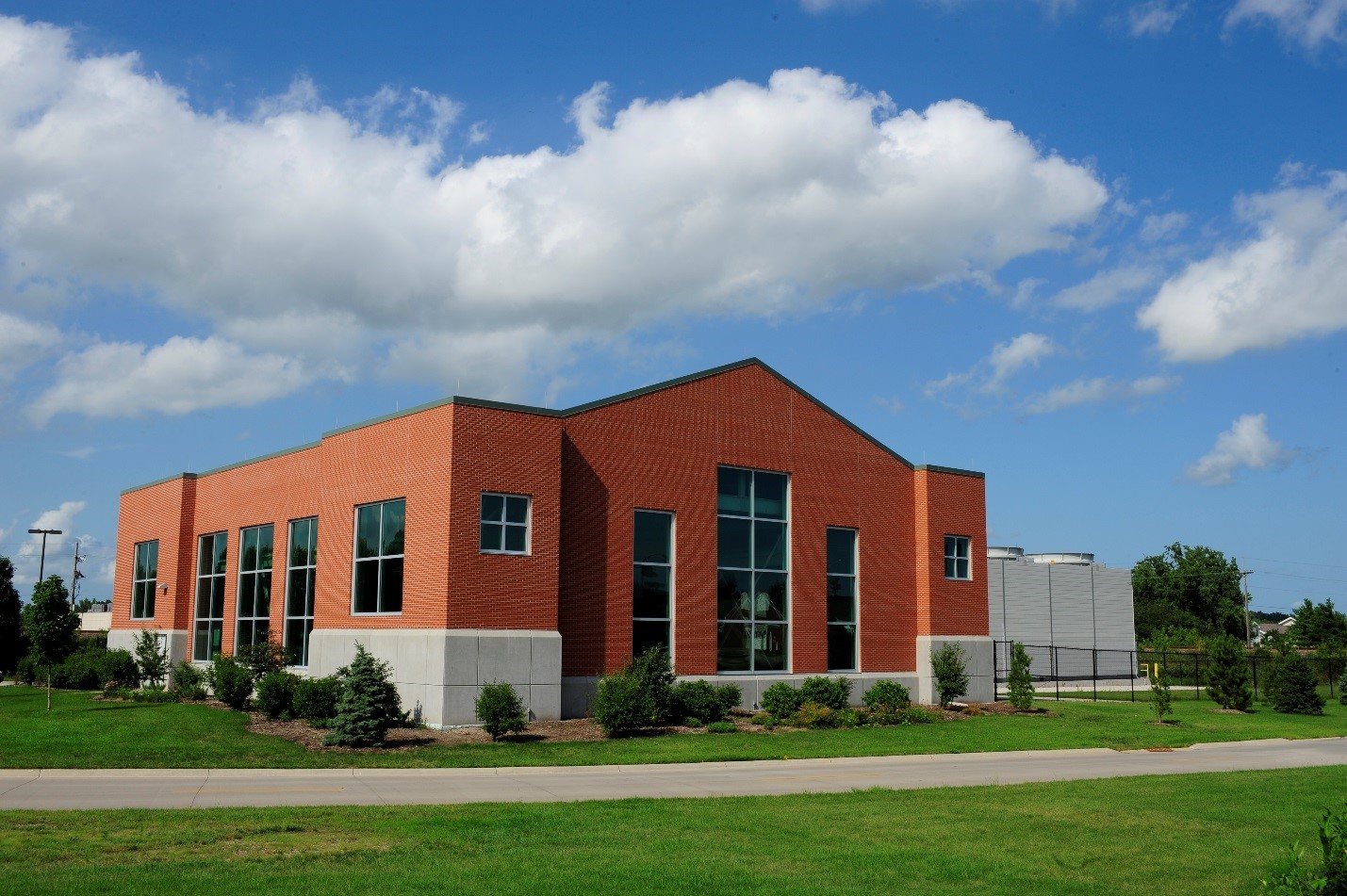 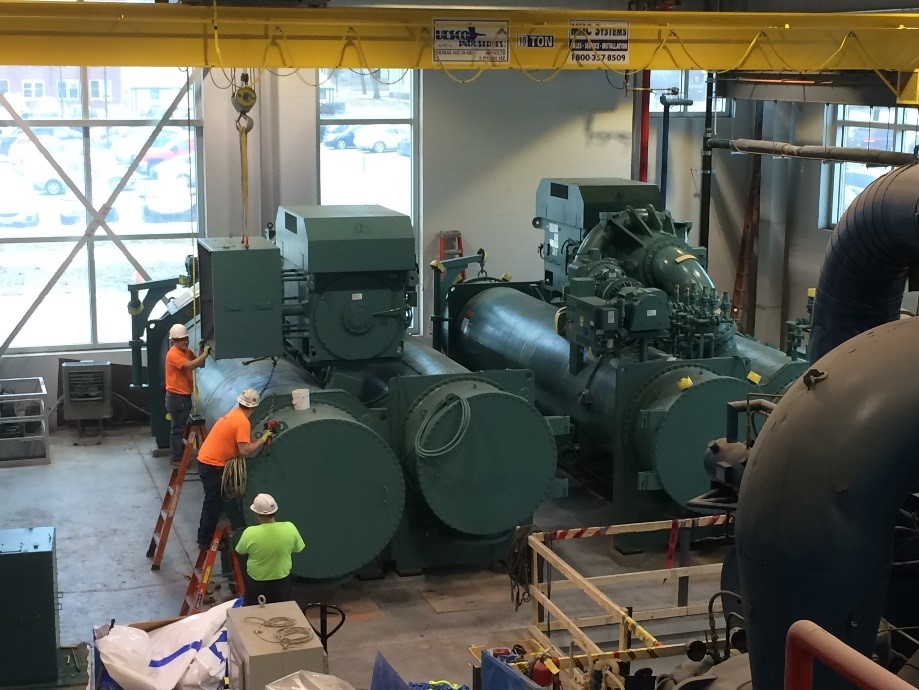 2016 marked the 125th Anniversary of operating a cogeneration plant on the Iowa State University campus. Utility staff hosted an open house where faculty, staff and students could tour the plant and see the efforts needed to supply the energy demands for a major university campus. The event also showcased the new natural gas boilers and new boiler addition. 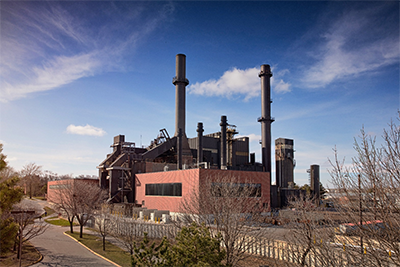 The Future – Looking Ahead

The Power Plant operates continuously and can supply all the heating, cooling and electrical energy needed for the main campus. The Power Plant still uses the efficient cogeneration process provide the energy the campus needs while continuing to examine energy conservation opportunities.

The existing coal-fired circulating fluidized bed boilers will need replacement in the next 10-15 years. Environmental concerns will continue to grow, and it is likely that the university will replace these coal boilers with natural gas fired equipment.

Cooling demands continue to increase. The main Power Plant and North Chilled Water Plant do not have space to install additional chiller capacity. The university will need to build a new West Chilled Water Plant in the next 10-15 years to serve increasing loads.

Iowa State, like most university campuses and cities, relies on aging utility systems. The university will continue to invest in these systems to ensure reliable and economical utility services to the campus.